We spent our final full day in the Arenal area doing the most adventurous stuff we could handle – ziplining and whitewater rafting!

I’ll admit that I was a little nervous about it. I’d never ziplined OR whitewater rafted before this. I’m not really afraid of heights, but I wasn’t sure how I’d feel about dangling from a wire, hundreds of feet off the forest floor.

After we arrived at Arenal Sky Adventures, we had to wait a while. This wasn’t helping my nerves any. Finally, we were united with Luis, who would be one of our guides. He got us fitted with our harnesses and showed us how to use the carabiners. He noticed my hands and had me demonstrate that I would be able to open and close the carabiners and hold on to the ropes.

We had to climb a little to get to the first zip line platform. We had worn our water shoes, so it made it a little awkward to walk on the rocks and climb up the dirt paths, but we survived. The next thing I knew, I was up on the platform, getting hooked up to the cable. By this time, I wasn’t nervous – I was ready to do it!

Off I sailed, over the treetops. I must not have been holding my body at the right angle, or maybe I was braking too hard, because before I arrived at the landing platform, I came to a complete stop! I had to reach up and pull myself along the last 30 feet of cable. It was awkward, but hey, that’s how I roll.

After I was on solid ground again, Dave came sailing in really fast, and then Luis. We had two more zip lines to go. I came in faster on those – which was fun!

As we made our third landing, I remembered that we would have to rappel down from that platform to get down to the river where we’d go rafting. Oh my. I’m going to hazard a guess that it was a good 100 feet down. Maybe even higher, I’m not that good with numbers.

Luis rappelled down first so he could start getting the tubes set up, and so there would be someone there to help Dave and I when we landed. Drex, the other guide, stayed at the top to help us. He hooked me up first and I pushed off. It was a weird feeling to be hanging that high up. My stomach felt fluttery at first, but as I looked around at the beautiful rainforest all around me, I was distracted from any feelings of fear.

Once we reached the bottom, we had to turn ourselves around and push off a rock face, swing over the river and grab Luis’ hand, who was waiting for us there.

Here’s the video I made of our GoPro footage. It’s only the zip line part. I’ll post the whitewater part later!

Now came the whitewater rafting part. The water was higher than normal because of the recent storm, but I think that made it more fun. We were bouncing around, crashing into rocks and dropping over little waterfalls. At one point we stopped, got out of our rafts and walked over to a waterfall. We stuck our heads under it and got totally soaked. The guides were saying how cold the water was, but to me it was comfortable. I mean if you’ve experienced the spring-fed, ice-cold waterfalls in Vermont, you’d think Costa Rican river water was like bathwater.

Our river adventure lasted another hour or so – but I would have been happy to keep going. When we got out of the water, we walked up a little hill to a place where we could change back into our dry clothes. They gave us a hot drink made with sugarcane, in case the river had chilled you. Then, we got on a bus that took us back up to where we had started.

After that, we were off in search of lunch. We saw a sign for a vegetarian and gluten-free place in a nearby town called Castillo, so we headed there. It was called La Ventanita (the little window), and it was part of a guy’s house. Dave got a burrito and I got quesadillas, both of which were really good. We noticed that the man was American, although he spoke perfect Spanish too. It appeared his wife was Costa Rican. So we wondered what their story was. I would have asked, but they seemed to be in the middle of preparing some kind of dessert and they looked really busy, so we just ate and went on our way. 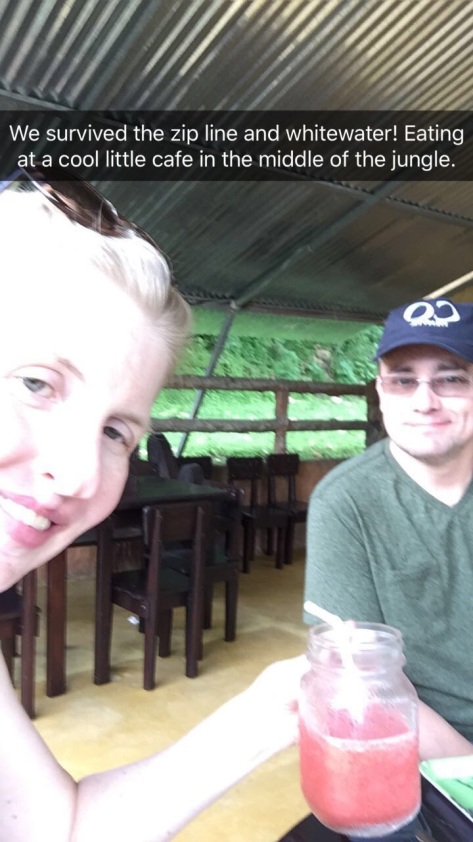 In the road on our way back, we saw a beagle playing catch by himself. He was throwing back his head and letting the ball fly up in the air, and then running to catch it. He was barking and wagging his tail. It was the cutest thing ever.

After that adventurous morning, we went back to the hotel to take showers and grab a nap. We had dinner at a restaurant called Lava Rocks. We both got casados, of course! How else would we have celebrated our last night in La Fortuna?

The next day, we would be heading off for our second week in Costa Rica – on the Pacific Coast!