I’m sitting here listening to an Indigo Girls playlist on YouTube. It’s been a while since I listened to them, and oh man, how I’ve missed these beautiful melodies. They’re like the female version of Simon and Garfunkel. They make me want to learn to play the guitar. Their music reminds me of my carefree younger days in Vermont, when I was so naive I wasn’t sure if the Indigo Girls were lesbians, and if they were, did liking their music make me one too?

There’s more than one answer to these questions, pointing me in a crooked line.

It’s been 8 days since my last post, which stinks. That weekend I was barely containing my rage over how uncomfortable my mouth was. First thing on Monday I got in to see the dentist and had him trim off a bunch of the material. It helped, though my mouth was so sore at that point it was hard to tell if it was all OK or if more needed to be trimmed.

Immediately after that, I had to drive down to Mystic for a meeting. Of course there was a big ol’ snowstorm brewing at the time, so it took twice as long to get there as it should have. As soon as I got there, it was work, work work. I considered doing blog posts in the evenings like I have in the past, but Mystic in the middle of winter isn’t terribly exciting. I only got to leave the hotel in the evenings for dinner anyway. It was really pretty under a blanket of snow, I will admit.

The saddest sight my eyes can see is that big ball of orange sinking slyly down the trees.

It seemed that there was still material rubbing the sore spot on my gum/lip, because my mouth was still in so much pain every time I tried to eat. It probably sounds stupid that I was so insistent on keeping the bridge in, when I could have just taken it out and most likely no one would have noticed anyway. But no. I refused. At one point after lunch one day I did go in the bathroom and remove it, but no sooner had I done that when I was asked to talk extensively about something. So I had to excuse myself for a moment under the premise that I was getting a mint out of my bag while I discreetly popped the bridge back in. I didn’t want to feel like I was lisping and slobbering all over the place.

I’ll tell you, having constant mouth pain really doesn’t make for a social Heather. I was so irritated the whole time I had to keep telling myself not to punch anyone in the face. I’m usually pretty quiet anyway, but this time I was avoiding talking as much as I could because the less I moved my mouth, the better. I was so relieved to get in my car after the meeting ended. The first thing I did was pop out the bridge. I resisted the urge to throw it out the window.

When I got home, I found some emery boards and got to work sanding down the piece that was irritating me. Believe it or not, it actually worked! I probably only sanded off a 1/16th of an inch, but it was all it needed. These last few days the sore has been healing and I’m now able to wear the bridge all day without getting violent.

If we ever leave a legacy, it’s that we loved each other well.

In other news, tonight I was supposed to give a speech at Toastmasters. I had planned to talk about the history of cleft lip and palate treatment, as this was something I’d been wanting to look into for a while anyway. The meeting ended up getting cancelled thanks to the weather (snow and 15 degrees… what’s the problem?). When I got home I recorded myself giving the speech but I had issues getting it uploaded so I’ll have to try again another time. For now I am ready for night-nights. 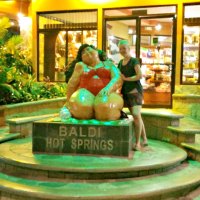