The 2017 NFED Family Conference has already come and gone – in a flash, it seems. This year it was held in Falls Church, VA, which is right outside of our nation’s capital – Washington DC. The day before conference was Advocacy Day, and many NFED families went to Capitol Hill to speak with their state representatives about mandating that dental treatment be covered under health insurance.

I won’t recap every second of the conference – just point out some of the highlights.

Now that I’ve been going to conferences for 6 years straight (except for last year, which I skipped), it’s crazy cool how many people I actually know! Of course there’s my adult EEC crew, Norma’s Canadian entourage, my mini-me – Ally, and her family, and all the other adult parents of EEC kids (most of whom are not much older than me).

There’s also a lot of youngsters who I met when they were just little tykes, and who are now getting so big! Julie, who once cried when I tried to hold her, now sought me out to say hello! I reunited with my two Sams, although I only have a picture of one of them. The boys I met at my first conference are all teens now and towering over me.

Of course the are plenty of other adults I enjoy reuniting with – I don’t want to try and list everyone here for fear of missing anyone. But you know who you are!

I was excited to discover a mother/daughter team from Connecticut at the conference. Not only that, but the daughter has EEC! Doubly exciting, since we hardly ever get New Englanders, much less Nutmeggers at the conferences. I will definitely be getting in touch with them so we can get together locally.

Another new EEC person was 9-month old EJ, who was there with his mom Iris. Iris introduced herself to us by announcing that she had Facebook stalked all of us. If she hadn’t been a mom of a young affected boy, this might have been super creepy, but we all laughed and then fought over who would get to hold EJ next.

I’ll let the photos do the rest of the talking – and let me say a quick shout-out to Iris, Caitlin, Terri and Suzanne for sending me most of these pics. I think only about 4 of them were mine to begin with. And thank you Bridget for the picture of Sam and I. 🙂 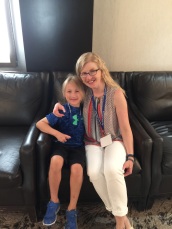 Some of the EEC crew

A collection of EEC feet 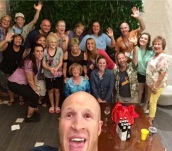 Hanging out in the hotel lobby!

Jack packing up his bike to ship back to Oregon!

All the EEC people at conference.

Me with some of the next generation

Posing with our past selves.

Caitlin, Suzanne, me and Terri 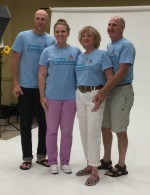 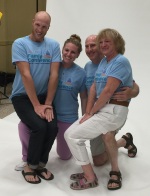 Tyler, Caitlin, Will and Suzanne

Iris, Marc, me and EJ 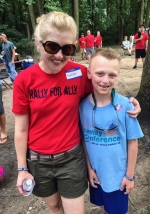 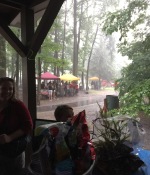 Everyone huddling out of the rain at the Rally for Ally

After the conference was the Rally for Ally. I had hoped to get to chat with a lot of people there who I hadn’t gotten the chance to talk to at the conference. However, about halfway through, it started torrentially downpouring, and I ended up heading back to the hotel with the MacDonald clan. We got dinner in the hotel restaurant and then it was time for me to catch my plane!

Next year the conference is going to be in Oregon! I’m already trying to figure out how much time I can get off from work so that I can make an extended trip out of it.

Last time I wrote I was excited because I went through my dentist appointment without having my bridgework removed. My doctor has since acquired the necessary tools to remove my lower bridge, so that was how I spent this Wednesday morning.

I made a quick video about it when I got home tonight. You can see I’m trying really hard to speak clearly. It takes me back to all the times I had surgery or orthodontic work and had to re-learn how to use my mouth. It really sounds like I say “meow” at 2:34.

Tomorrow I go back for a temporary bridge, so perhaps I’ll post an update of myself struggling to speak again tomorrow night! 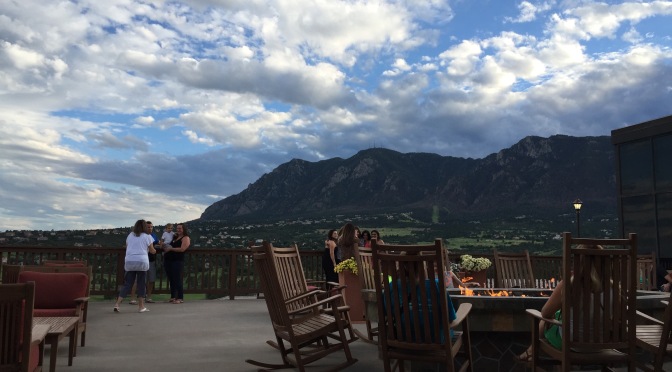 I’m running out of steam on this one blog post a day business! I didn’t take many pictures today.


This morning we had a motivational speaker who was interesting. He actually has a child with a rare disease too (though not ectodermal dysplasia). He had some people get up and share their experiences which was interesting.

My ‘Adult Life 101’ session went well. I got there early and had everything set up all nice. The group was not as large as I had hoped, but we were still able to have a decent little discussion. We really could have used more time though.

After that it was off to a lunch meeting to discuss the NFED blog. We brainstormed some ideas for the next couple of months. Once again time ran out. It seems like time is flying here!

The afternoon was the syndrome specific session, where we get to meet with other affected people and doctors to discuss various topics.

Tonight was the talent show, which was a dinner show this year. For some reason our servers were really angry and kept slamming our plates down. I guess they didn’t like the entertainment.

We then hung out on the patio for many hours. In fact, right now I’m actually writing this from one of the patio areas while my fellow EEC gang talk about how we can better serve older people with EEC. I’m listening!


In other news, back east, my friends the Claire family spent the day in Boston having little Ronan’s first cleft lip and palate evaluation. They will have to make many trips down in the coming years. It will be a hard row to hoe, but they are an amazing family and will power through. Dennis keeps using a hashtag which I will have to steal- #eecstrong

Definitely gonna make up some T-shirts.

In conclusion. Here’s a selfie of the group I’m with right now.

Tomorrow is the last day! Suzanne and Will will be leaving. So sad!