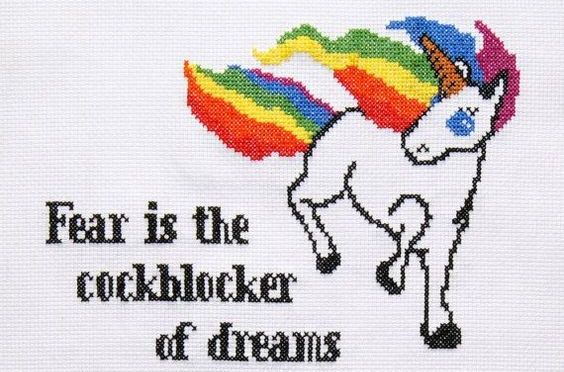 I’m talking about fear, of course. In going through a stack of paper shoved on a shelf, I found what’s written below. I wrote it a little over 4 years ago, when I was underemployed, drowning in student loans and generally feeling like a loser. You don’t always realize how far you’ve come until you look back at where you once were. Of course I have made mistakes and stumbled in the 4 years since I wrote this, and I am constantly thinking about what I can do to grow and become a better person. In some aspects, I have come a very long way. I now have a job that requires me to keep a grip on my fear and plunge forward, whether I am ready or not.

It’s weird how fear can hold you back so much. Frustrating, too. When logic and reason tell you that you can do whatever you put your mind to – that you could be a great success with lots of effort and perseverance. Yet those beasts within – fear and self doubt and the inner critic – all come thrashing out to put a stop to any ideas of self improvement or attempts to get somewhere in life.

I have spent the last 4 years of my life battling this trinity of self-destruction. Battling is probably an overstatement. More like, being battered by. It’s not like I’ve never felt these feelings before. In fact, much of my life I have struggled to feel “good enough” for society. But most of my life I’ve had structures in place that kept me moving along the stream of progression.

School: growing up and progressing from grade to grade, completing milestones like “get driver’s license”, “take SAT’s” and “graduate high school” kept me occupied during my formative years.

College: I blindly rolled right on to college right after high school. This is where the beginnings of my “grown up” issues really began. Suddenly it hit me that I was an adult and things from here on out were pretty much up to me. I felt seriously unprepared for this.

Religion: Having grown up with religious guidelines and expectations (Be good. Pray. Find a good man to marry. Have babies. Keep the faith). I was able to keep the self-doubt monster at bay for most of my early life.

Job: During my early 20’s I had a “real” job where I was expected to show up on time every day, dress professionally and perform my duties. In turn, I was rewarded with steady pay, good health insurance and a schedule for my days.

The two pillars of Job + Religion kept me safely enclosed in a box for a few years. Many people (I assume) must feel content in such a box because it seems they spend their entire lives inside the parameters set by religion and their careers. This concept didn’t appeal to me though. I knew there must be more to life and I wanted to experience it.

First, I had to get out of the religion. It wasn’t as simple as ceasing to attend church. My whole social life was that church. My family had been part of it for generations. I’d never even chosen to be part of it. I’d been born into it. Until my 20’s it never even occurred to me that I could leave. Even when I left, I had no intention of finding another church. I wanted out of religion, period. In doing this, I essentially said goodbye to a whole community of friends and ‘aunts’ and ‘uncles’. I don’t think I knew just then how brutal that would actually be. Perhaps naively, I had not entirely thought it through. I think I envisioned myself being “not religious” yet somehow continuing to socialize and be welcomed into these people’s homes.

Leaving Christadelphia was like stepping off the edge of a cliff. It was the craziest thing I have ever done, but also the most important decision I made in my life. It took a ton of courage and swallowing my fear to take that step. It took me years to find my footing, and in some ways I am still reeling from the repercussions of that decision, but I do not regret it for one second.

You would think that after making such a bold decision, the rest of my life decisions would have come easy. I would have overcome my fear of failure or rejection or disappointment. Nope. It seems to be one of those things you have to keep pushing.

Just the other day I wrote a list of the things I am afraid of when it comes to writing and sharing my writing publicly. Here goes:

Hah – I just threw that last one in there. I don’t want to overshare, but I also am trying to take Brene Brown’s advice of letting oneself be vulnerable. I am going to show up and let myself be seen, as she says.

I am not going to let my fear cockblock my dreams.

Will you come along for the ride?