The main attraction of La Fortuna is Volcan Arenal – the tall, nearly-perfect cone that lurks just west of town. The history of the volcano is so interesting to me – people used to live and farm at the base of it, either not realizing it was a volcano, or thinking that it was dormant.

On the morning of July 29, 1968, the volcano spontaneously erupted, and continued to erupt for several days. The ash, lava and rocks from Arenal covered an area of about 6 square miles. It destroyed three small villages and killed many people, livestock and crops. You can read more in-depth about it here: http://www.arenal.net/arenal-volcano-1968-eruption.htm

Arenal remained active until 2010. It was a huge tourist draw – people wanted to stay in hotels with a lava view! By the time Dave and I heard about Arenal, it had stopped spewing rocks and lava, although apparently it still releases hazardous gases, so hiking up to the crater is prohibited.

On Tuesday, we headed over to Arenal National Park to check out the hiking trails. There are two hiking options that take you around the lava flows from the 1968 eruption. The landscape is prehistoric looking – I kind of felt like we were walking around in Jurassic Park, except without the dinosaurs. 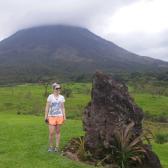 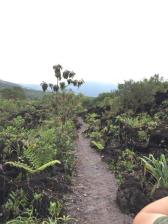 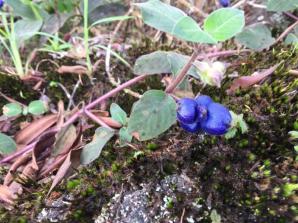 We took a lot of GoPro videos, which I haven’t yet compiled and edited, except for this little cameo right here:

Towards the end of the hike, we came across a couple of capuchin monkeys. They had been in the middle of the trail, but then they hid themselves as soon as I saw them. We were trying to get a peek at them, and we could hear them making scary growling noises, but we could not see them! For a moment, I was afraid they might jump out of the grass and attack us, but luckily they aren’t those kind of primates. 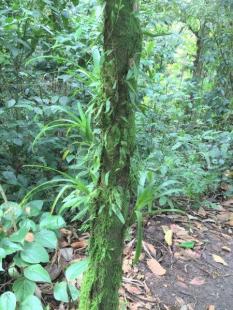 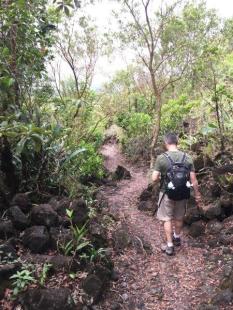 We grabbed casados for lunch in La Parada, which became one of our regular restaurants for a quick, delicious meal. Then, we spent the afternoon chilling by the pool at the hotel. Oh yeah.

One of the many street dogs. This one looked like my dad’s dog Bruce.

Veggie casado for me and lengua in salsa for Dave. 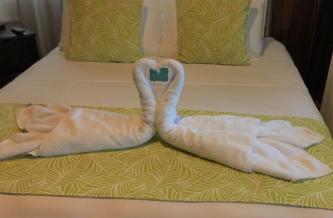 Swans on our bed!

This is the life!

That evening we went back to Ecocentro Danaus for our night rainforest tour. Our guide was a young guy named Elias who spoke perfect English, which I appreciated. Right away he showed us a momma and baby sloth and told us all about how the green algae that grows on sloths is a symbiotic relationship. The algae gets passed on from the mother to baby during the baby’s first months of life. Not only does it help to camouflage the sloths, but they can obtain nutrients by licking it! He also explained how the sloths will climb up or down in the trees, depending on the temperature. And here I just thought they were super lazy.

In addition to the sloth, we saw all kinds of frogs, insects and even a little caiman. Elias apologized for there not being more animals to see – he had hoped to show us the big caiman and some snakes, but I was happy with what we saw.

After the tour, we had dinner at Life House, which was the place we’d eaten lunch at the day before. It was kind of late, so we were one of the only customers in the place, which made it feel a little awkward. But the food was good!