For about a week now, I’ve been 85% deaf (as opposed to my usual 50%). I seem to have acquired an infection or a swelling or some thing which has caused my good ear to feel clogged and useless. I’ve been walking around feeling like I’ve just jumped into a swimming pool and the world is muffled.

My nerves are a little frazzled lately, in part due to this ear thing. If you’ve ever gotten water in your ears, or had your ears pop in an airplane or something, you know how annoying it is when they don’t feel (and hear) right. You never think about how often people speak in hushed tones at work (or should I say gossip?) until you can’t hear them. Sitting at my desk and watching a co-worker mouthing the latest gripes and having no idea what she’s saying makes for some awkward moments. Worse yet is not being able to clearly hear my boss giving direction for a project.

Ok, who am I kidding, this happens even when my good ear IS working.

So you’re probably wondering what the problem is. Well, ear problems go hand in hand with cleft lip and palate, thanks to improper Eustachian tube function. Since infancy I had frequent ear infections. Every time I’d have surgery on my mouth, they would pop some tubes in my ears in an attempt to alleviate the ear issues. The tubes would always work their way out a short time later and the infections would return. Over time, my ear drums became heavily scarred from all the tubes and all the infections and subsequent ear drum ruptures.

When I was 9 years old, I had surgery on my left ear. I had been suffering from a chronic ear infection for years before that. I’m sure there was pain and hearing difficulty during those years but all I remember was the frequent dosing of antibiotics, or “bubble-gum medicine” as we called it, because it was bright pink and candy-flavored. So I was 9 years old and I had this surgery which was supposed to be an outpatient procedure. I think it was an exploratory surgery because the doctor we were going to couldn’t figure out what my problem was. So when they went in, they discovered that my inner ear was full of cholesteatoma, which as I was made to understand at the time, is basically a tumor made of skin. They opened up my ear from behind and removed all the cholesteatoma, along with bone and parts of my inner ear.

I woke up from the surgery with an incredibly sore neck. My head was wrapped in what felt like an enormous, heavy bandage. My parents were really upset and they told me then that the hearing in my left ear was gone. I don’t recall being sad about it. Considering the amount of cholesteatoma and the extent of the infection I had at the time, I probably hadn’t been able to hear well from that ear anyway.

A few days later we returned to the doctor so he could remove the bandage and take a look at my ear. I sat on my mom’s lap as he began unwrapping. As he pulled away the last bit of gauze, a gush of smelly fluid came out from behind my ear. Mom exclaimed concerns about fainting and the doctor exclaimed too – something along the lines of “Oh crap, that’s not good.” The incision had become infected. Back on antibiotics I went, and home I went with a hole in my head. It had to remain open until the infection cleared up.

Part of the infection-healing process was that my dad had to apply antibiotic ointment to the incision every day. My mom couldn’t bring herself to do it (and I don’t blame her). It was a hideous experience. When he would get home from work in the late afternoons, I would lie face down on the bed while he took a Q-tip and gently applied the antibiotics to the back of my ear. I hated every second of it and just thinking about it now makes me queasy.

Ultimately that infection healed and the wound was closed up. I missed the first week of 4th grade and, as you can see in the photo above, once I did return to school I still had the cotton ball and ointment going on for a while. Plus I was exhausted.

Sadly, that was not the end of the ear problems. The following summer I had to spend a week in the hospital for an intravenous antibiotic treatment to clear up further ear infection. By then we’d switched to another ear doctor because my parents were horrified that the previous one had missed the signs of cholesteatoma until it was nearly too late. For several years I had regular visits to the ENT to have my ear “suctioned”, which as you can imagine is not the most fun process. After a while, it was determined that my ear was okay and I could stop using ear drops and eventually I stopped visiting the ENT.

For the most part my ears were okay throughout my teens and 20’s. The occasional ear infection or wax buildup in my “good” ear would sent me to a doctor for treatment. It wasn’t until my 30’s that I finally decided to find a good ear doctor and find out what was going on in both ears.

Stay tuned for Part 2 – my adventures in ENT issues as an adult.

When I was 10 years old I was given this little pink diary for Christmas. I had no idea then just how significant a role this little book (and the dozens more that would follow) would play in my life. As a 10-year-old, I wasn’t even really sure how to keep a diary. All the books I’d read about diaries usually involved extreme situations and I was no Anne Frank. Often times I would just write “It’s late, I gotta go!” as I climbed in bed for the night. But it got me into the habit of writing and before long, I was spilling my guts onto the pages. Through the years I relied on my journal as a place where I could vent my frustrations, share my ideas and express myself without worrying about anyone else’s reaction. 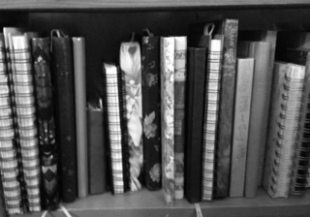 My journals are one of my treasured possessions because they are like little time-machines that transport me to different moments in my life. Some of the things I’ve written bring back happy memories, and other things fill me with angst. Sometimes it even seems like I’m reading the thoughts of a stranger. It makes me realize how much people can change as they go through life, and how various experiences can alter your attitude or opinion about things.

I plan on sharing some excerpts from my journals because I think they can give a more accurate picture of how I was feeling or managing things at the time. Like this one, where I was kinda freaking out about my upcoming bone graft surgery.

A week from today I will be in the hospital. By now (10:07pm) I should be out of the operation room maby even out of pain! I could only dream! Im sort of looking forward to it but I’m worried about the pain mostly. Do you think I’m crazy or not because I am looking forward to it?  Mommy bought a bunch of valentines decorations for me to make while recovering. I hope I will be on the seventh floor with the older kids but on the sixth floor I’ll only have to stay 2 days. If I go on the 7th floor I’ll have to stay longer. I might think about staying on the 7th floor for 2 days or more but I am hoping to come home early so I will get to feel better with my family.

I read this now and find it sort of funny how I was obsessing over which floor I was going to be on. It wasn’t like I had a choice. As if they’d wake me up after the operation and say “Hey, you want to be on the 6th floor with the babies or the 7th floor with the cool kids?” According to my diary, I got to come home after 2 days. I didn’t write anything about what floor I was on (it’s unlikely I was even aware at the time anyway). Because my mom got me supplies (paper doilies, red and pink paper, stickers and metallic heart confetti, to be specific) to make Valentines while I rested, I’ve since associated Valentine’s day with that sluggish post-surgery recovery feeling. How romantic.

I’ll leave you with a more typical diary entry from my 11-year-old self: 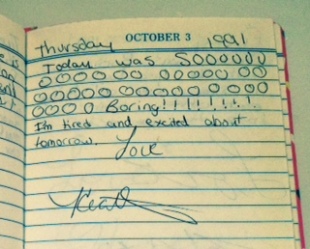 It is a crisp October night in 1984. I’m sitting at the kitchen table watching my mother struggle to cut shapes into a pumpkin, her brow furrowed in concentration. The mouth of this Jack-O’Lantern is lined with zig-zagging teeth and as Mommy slides the knife upward, it cuts through the pumpkin flesh and up into the nose-triangle. “Dammit”, she murmurs under her breath. She pulls the knife out and resumes cutting from another point. Moments later, on another upward cut, the knife slips and a chunk of pumpkin clatters to the table. Mommy lets out an exasperated sigh and declares, “Well, now the pumpkin has a cleft lip, just like you!”