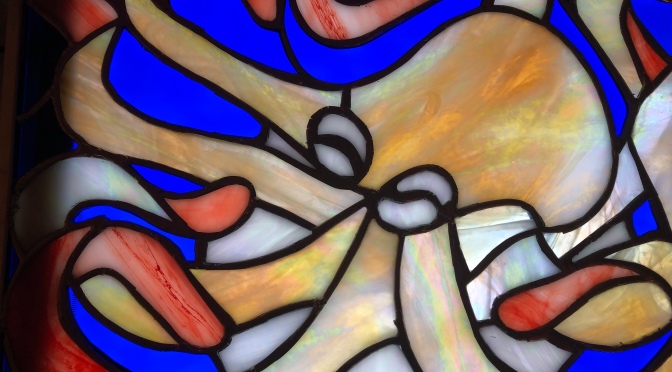 It’s been a while since I’ve blogged, and that is (partly) because I have been focusing on learning the art of stained glass! If you follow me on Instagram or Facebook, you’ve seen plenty of my posts over the last 6 months or so involve glass in some way. Here’s the back story:

At the end of last summer, I was feeling like it was time for me to try something new. I get this urge from time to time, when things in my life are feeling stagnant, or I am feeling creatively stunted. It is what motivated me to take pottery lessons so long ago, to get my degree in landscape architecture (an expensive foray), to take the master gardener certification course, and to get involved with Toastmasters.

I’ve always had a thing for glass. Perhaps it’s not really glass itself, but light. Glass is a medium that changes appearance depending the light source, intensity, and movement. I guess what I really love is light itself. I love light.

Ahem, back to my story. So late summertime, I’m looking for my next creative adventure and it hits me – GLASS! It is one of those things I always wanted to try, and I’m at a time in my life where I can easily afford to take a class and buy supplies, so why not? I googled “glass studios” and found a place about 20 minutes from my home. I also found that a local art center was doing a one-night class to make fall leaves. I asked my dad to join me and we made our very first stained glass pieces. 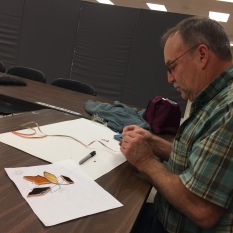 The stained glass classes at the glass studio were offered in 6-week sessions. I wasn’t able to sign up for a session right away, so in the meantime I took a couple of the one-day classes they offered on Saturdays. I asked my friend Stacy to join me.

The first class was pretty minimal work. We had to select a piece of glass that would be slumped over a form in the kiln to create a vase. We could trim the edges of the piece however we liked. After we left, the studio owner would fire the piece for us, and we could pick up the vase the following week.

Although I had done some cutting to make the leaf mentioned above, I was still getting the hang of it. I found the glass cutters offered at the studio were a challenge for me to hold. I watched as the instructor held the cutter in his hand. His index finger extended down to the cutting head while the rest of his fingers gripped the handle. Well, that didn’t really work for me, since I was working with two less fingers.

Nevertheless, I persisted and was pretty happy with how my finished piece turned out. Unfortunately for Stacy, her piece broke when they attempted to drill through the bottom so she could use it as a lamp shade. 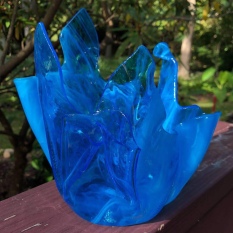 After that first class, I emailed the studio to ask if they had different cutter styles I could try out, since the pistol grip style was clunky and hard for me to control. It turned out they had a couple of options. The next time I went in, I tried a pencil-style one and one that had saddle-shaped handle. The saddle grip worked best for me, as it allowed me to grip close to the tip with my fingers and use the pressure from my palm to push the cutter.

I ended up buying a really cool cutter that has an adjustable grip handle. It has made cutting the glass so simple and fun!

The next class we signed up for was to make wind chimes. We were given a wide array of fusable glass to choose from and allowed to go wild. Stacy went with an aquatic theme for hers, but I decided to make abstract leaves for mine.

Once again, we had to leave the items behind for the studio to put into the kiln, and then we could pick up our work the following week. I was really happy with how mine came out, although I think the stick I hung them on is a little too big, so I may re-hang it later.

As the holiday season approached, the studio offered fused ornament classes pretty much every weekend. By this time, Stacy and I had already started the stained glass course, but I figured the ornaments would make really unique Christmas gifts for the family.

The first night of the 6-week stained glass course, I had no idea what I wanted to make. I’ve never really been interested in the cookie-cutter stained glass designs you see in people’s front doors or in bars. I wanted my piece to be funky and artsy and different. The first night, I began sketching out this crazy spiral design that I’d been doodling in my notebook for weeks. It would look so cool, but as I drew it larger, I was intimidated by the complexity of it.

The following week was Thanksgiving, so there would be no class. Plus, Dave and I were going to Costa Rica, so I’d be missing the class after that as well. That bought me some time to think about it and come up with an idea. While in Costa Rica, we saw lots of blue morpho butterflies, which inspired me to do a butterfly pattern.

My first thought was to do a realistic rendering of the blue morpho, but as I searched online for stained glass butterfly patterns, I came across a drawing of a celtic knot butterfly, and I knew that was the one I had to do.

Little did I know, as I began that project, just how hard it was going to be to cut out the curvy shapes. I broke several pieces before the instructor informed me that they had a saw that I could use for the especially curvy parts.

Even with the saw, I left a lot of extra glass on my pieces, which meant that I had to spend a LOT of time using the grinder to get my pieces down to size. At first I found it very hard to hold onto the small pieces, and my hands were cramping up. I asked if they had something to hold the pieces with, and it turned out there was! Once I used that, it alleviated the strain on my hands and made for a more pleasant experience.

By week 3 of cutting and grinding, I was feeling somewhat downhearted about my project. I confess, I’m an instant-gratification kind of person, at least when it comes to learning new things or creating something. In my artistic experiences, I tend to prefer projects that can be completed in one sitting. I like the feeling of accomplishment that comes from finishing something. Of course I am aware that working on something over time can also be gratifying, but I was really getting tired of grinding the life out of my glass pieces.

It took me most of the 6-week course (actually 5, since I missed a week while I was in Costa Rica) for me to complete the butterfly. I did learn a lot through the process, mainly that I should cut much closer to my pattern lines so I wouldn’t need to spend hours grinding. 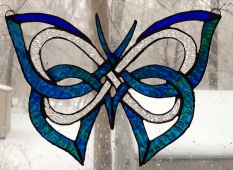 Once the butterfly was finished, I wanted to try my hand at a slightly larger piece. I had a couple of octopus drawings I’d done in the past that I thought would be cool to modify into a glass piece. 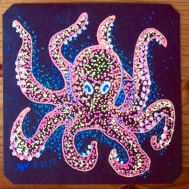 I redrew the design on a larger piece of paper, and then traced over that with tracing paper to create my new pattern. Originally I wanted my octopus to be bright orange with pink undersides like the drawing, but I couldn’t find a bright enough orange in the selection of glass at the studio. I settled for a piece of glass that reminded me of the inside of a seashell. It was mostly beige in color, with hints of purple and green and an overall iridescence to it, like abalone. For the underside I found a piece of glass that was swirled through with bright orange-red. And for the skirt, as I called it (I guess really it’s the armpits? ha ha), and the eyelids, I chose an iridescent white. For the water I just laid low and went with a clear cobalt blue.

By now I was much more comfortable cutting the glass, and did not have to spend nearly as much time grinding, which was a huge relief. Also, by this time the new year had rolled around and the studio had put fresh grinding bits on all their grinders so that also made the grinding process less annoying.

I’d come to grips with the fact that this was going to be a multi-week process, so I was feeling less angsty about the time it was taking to get my octopus put together. It ended up taking me about 10 weeks from start to finish. I made some more rookie mistakes in the process, but I am happy with how it came out! 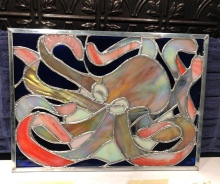 Over the past few weeks I’ve been putting together a small glass studio of my own. I am keeping an open mind as to where it will take me. I have no shortage of ideas for future projects, and perhaps once I’m more confident with my skills I can start taking commissions. We’ll see!