It was a very warm day, and there was a lot of hiking to get to each bridge. We saw many cool trees and plants, and we even saw capuchin monkeys! The hanging bridges were neat, since they let you walk up in the tree canopy.

After we’d gone over the bridges, we came to a trail that went down to a beautiful waterfall.

We ate lunch in the restaurant on site. The view was breathtaking. It looked out over the volcano and Lake Arenal.

I can’t recall much else about that day (this is what happens when you try to blog about something 3 months after the fact…), so I will let the pictures do the talking.

The road there was a little rough!

We saw this blue dragonfly hiding inside a rotted out stump.

Into the woods we go.

I was in heaven with all the trees!

See the very bright bug in the center of this photo?

Looking out from along the trail. 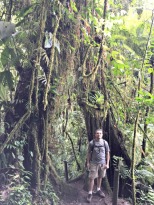 Oh, just another portal in the forest.

The path down to the waterfall.

Lunch with a view.

Arenal from the main street in La Fortuna

St. John Bosco with Arenal behind it

I hope you had a lovely Thanksgiving, those of you in the U.S. Ours went well, even though I joked the other day about being stressed out about the prep work. Cooking is really not my favorite activity. I like eating, but planning a menu, obtaining all the proper ingredients and assembling them into tasty dishes is a bit of a challenge for me.

That being said, I did put together a delightful pumpkin pie with a walnut oat crust, and my vegan creamed corn was a hit (they ate it all up!). My biscuits turned out flat and I made way too much broccoli casserole, but both tasted fine, as did my roast veggie mix. I had to recruit my brother Nick to take care of the apple pie because I ran out of time. My brother Kris brought mashed potatoes, vegan gravy, a very yummy seitan dish, cranberry sauce, and creamed onions. Nick made a sweet potato casserole with walnuts on top that was very good, and he made a delicious red lentil soup too. Our friend Grey brought green bean casserole. Dad (or possibly Nick) cooked turkey, stuffing and gravy at Dad’s house and brought that over to my house. So everything was vegan except for those last three items, obviously.

After we were overly full, we took a break and played a game called Quelf, which was pretty funny. Dad and Grey had to slow dance with each other. John had to lay his head on the table until someone touched him (which none of us did for ages because we didn’t know that touching him would do anything!), I had to crawl under the table for an entire turn. It was pretty funny.

Once we’d played two rounds of the game, we were ready for some pie. Both the apple and the pumpkin turned out yummy. It wasn’t long after that that we all headed to our respective beds and fell into deep slumbers.

This morning we met up at Giuffrida Park in Meriden for a hike. I lived in Meriden 10 years ago (excuse me while I wrap my head around that… wow!). When I lived there I would go over and climb Chauncy Peak like it was no big deal. It’s probably what kept me in shape. Today I thought my legs were going to give out.

Once we’d caught our breath, we decided it would be a good time to pose for a family photo. Bruce did not understand and was not interested in sitting still, which resulted in some hilarious shots.

It was a gorgeous day for a hike. It was really windy at the top, but the sun was so warm that most of us ended up in short sleeves for the duration of the hike. It had to be close to 60 degrees.

During the hike, John mentioned something about geocaching. Of course I had heard of it before but I never really looked into doing it. He has an app on his phone that tells you where caches are hidden, and there were a bunch in the park. Most were off the beaten path but we found an easy one on our way out. It had been put there in 2008, so it was a bit weathered. It was just a little plastic box with various little papers in it. Nothing too exciting, but I’d still be willing to try to find more.

When we finished the hike, it was time for leftovers! Back to the house we went, where we feasted once again. Then everyone packed up and went their separate ways. It’s always sad to say goodbye to my brothers, but at least I know we will be together again in less than a month for Christmas!